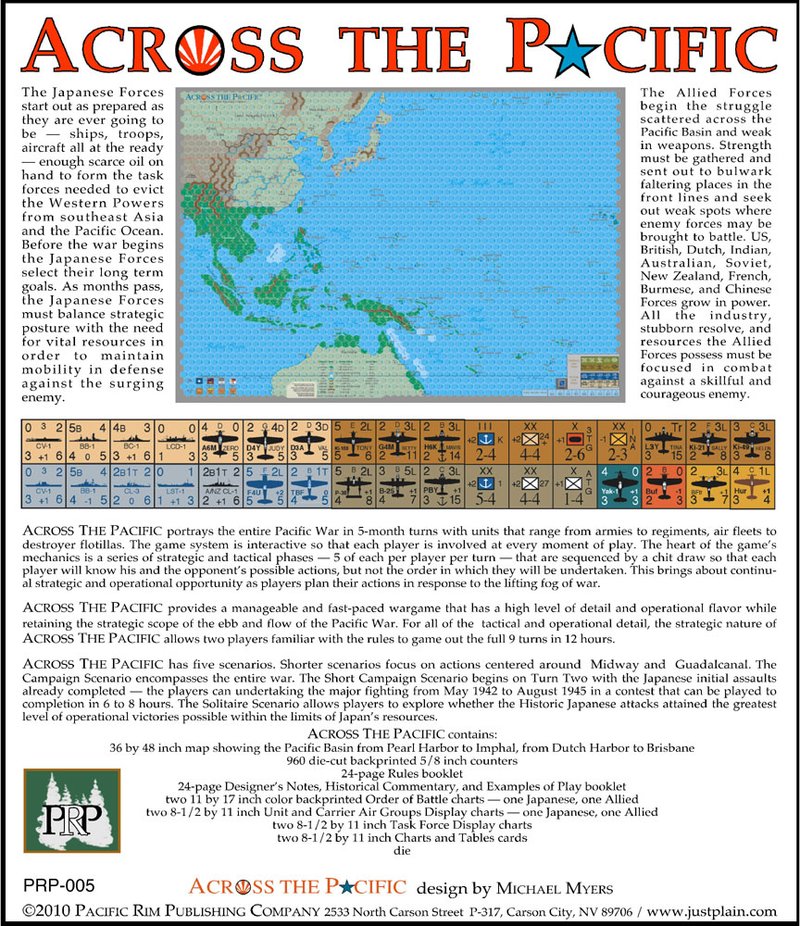 Across the Pacific  The Imperial Japanese Forces start out as prepared as they are ever going to be — ships, troops, aircraft all at the ready — enough scarce oil on hand to form the task forces needed to evict the Western Powers from southeast Asia and the Pacific Ocean. Before the war begins, the Japanese select their long-term goals — will they attack the United States or bypass Pearl Harbor and the Philippines in order to concentrate on knocking Imperial Britain, the Netherlands, and China out of the war first? As months pass, the Japanese forces must balance strategic posture with the need for vital resources in order to maintain mobility in defense against the surging enemy.

The Allied Forces begin the struggle scattered across the Pacific Basin and weak in weapons. Strength must be gathered and sent out to bulwark flatering places in the front lines and seek out weak spots where enemy forces may be brought to battle. US, British, Dutch, Indian, Australian, Soviet, New Zealand, French, Burmese, and Chinese Forces grow in power. All of the industry, stubborn resolve, and resources the Allied forces possess must be focused in combat against a skillful and courageous enemy.

Across the Pacific portrays the entire Pacific War in five-month turns with units that range from armies to regiments, air fleets to destroyer flotillas. The game system is interactive so that each player is involved at every moment of play. The heart of the game's mechanics is a series of strategic and tactical phases — 5 per player per turn — that are sequenced by a chit draw so that each player will know his and his opponents possible actions, but not the order in which they will be undertaken. This brings about continual strategic and operational opportunity as players plan their actions in response to the lifting for of war.

Across the Pacific contains: